ArchaeoFox: Exploring the World Through the Past

In February 2015, I was invited by Patricia Gonsalves, Archery Technician on DC’s ‘ARROW’ and director of Lykopis School of Archery, to travel to Vancouver and give a guest lecture and workshop on Viking archery and Bowmaking. 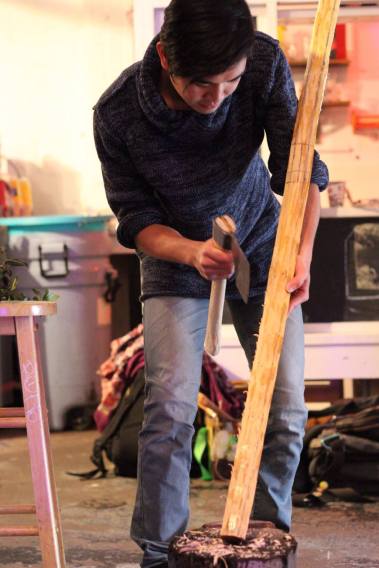 As soon as I arrived, axe handles needed to be carved out and axe heads hafted. Pine chop blocks were sourced and transported to Patricia’s prestigious archery school along with pre-prepared bow staves of Elm and Osage. And after just two weekends of hard work and many blistered hands; two workshops, six people in each, ran simultaneously over the two weekends, twelve students in total received a highly detailed and practical introduction to Experimental Archaeology and the craft of Viking bow making.

In the first workshop session, each student learned how to identify the best stave, how to split the trunk and by throwing their eyes to the grain, how to find the bow within the stave. With just an axe, they then each learned to carve out a billet.

By using a draw knife and rasp, each student then roughed out the basic shape of their bow, gradually rounding the belly of the inner heartwood and then outward to two thinned and evenly tapered tips, learning the basic dynamics of how a self-bow actually works, the bending mechanism behind each shot and the dynamic of a gradual bend throughout the limbs.

“Most were already talking about which type of bow they wanted to try making next; with one chap even saying that he thinks he ‘caught the bug’”.

An Archaeology of Archery: How to Make a Viking Bow

When I was asked to give a lecture to an archery school in Vancouver, I thought to myself, ‘what could I tell a bunch of experienced archers that they don’t already know?!’.

So rather than go on for an hour about ‘Viking Archery’, I decided to break my talk into three parts;

First: ‘Exactly what evidence archaeologists see when examining archery material; a sort of, ‘Intro to the Archaeology of Archery’; the preservation (or lack thereof) of bows and arrowshafts; the deceptive quality of wooden remains, realism in art; the difference between a symbol and a representation.

Second: ‘how these kinds of evidences have been used recently to build the image of the ‘Viking Archer‘ today; the bow and arrowhead finds from Hedeby and Nydam; archery in the saga literature and representation in later Medieval art.

And finally, the part that tied into the workshop: ‘How to make a Viking bow’.

“They can now question where the evidence comes from, separate fact from fiction and start rebuilding that knowledge into a craft”.

Here I could share my own experiences working at UCD Centre for Experimental Archaeology and Material Culture. Of my experience handling the Viking bow fragments from Dublin at the National Museum of Ireland and how I learned the process of Viking bow making, a skill that I then was able take to the Lofoten Islands in Northern Norway for two summers.

In this way I hoped to give them a taste of how evidence should be collected, interpreted and then used to build a picture of the past; and how sometimes, that very same evidence can also be misleading.

When combined with the bowmaking workshop, I hope that when each of Patricia’s students begins research into their own chosen field of archery, they will each now have a sense of archaeological context, where the evidence comes from and how to start rebuilding that knowledge into a craft 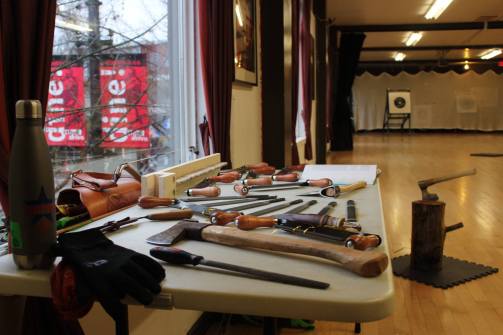 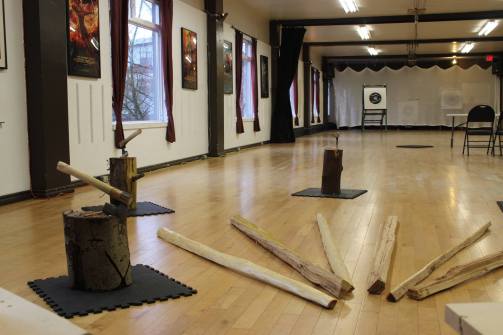 With so many people it would have been an impossible task to complete every bow, so after learning to make a bowstring from linen cordage and beeswax, each learned arguably one of the most difficult aspects to grasp, of the entire process: the ‘brace’. 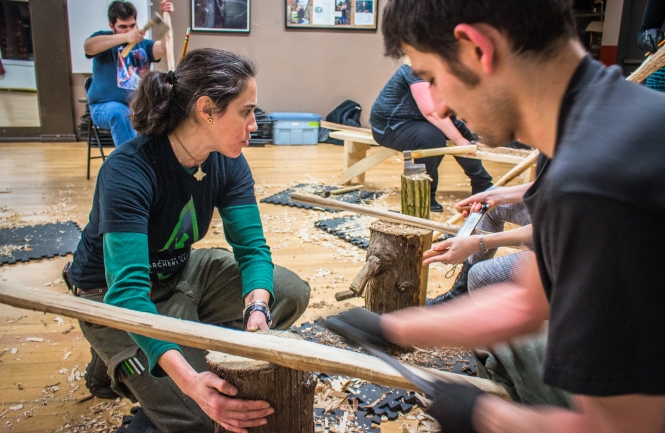 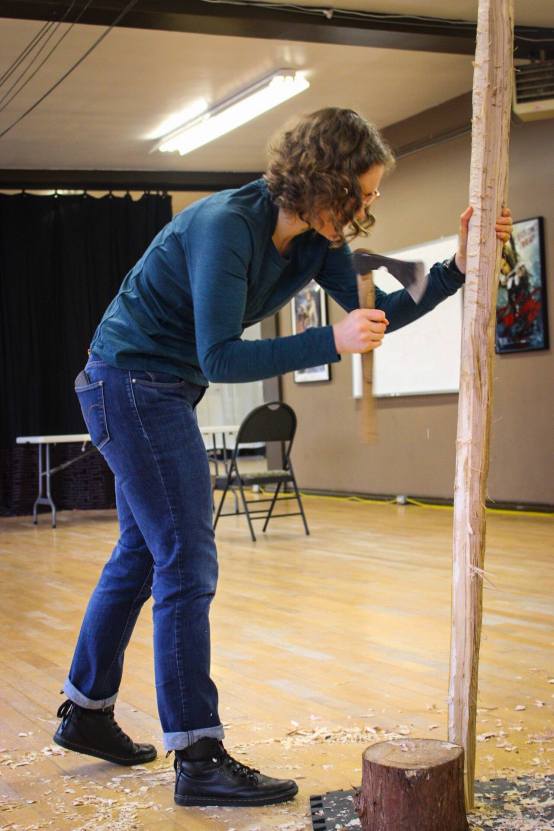 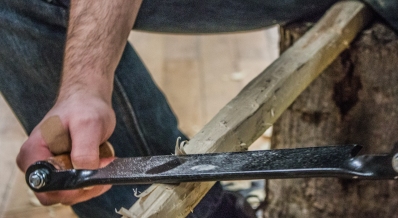 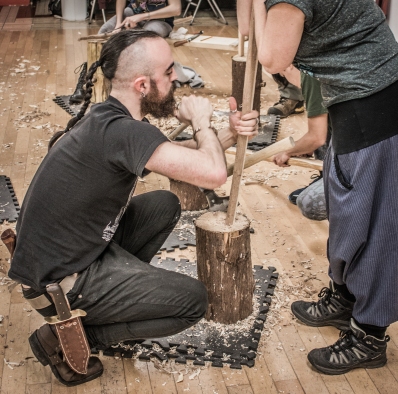 This is when the bow is first strung, which often results in a rather ‘un-bowlike’ shape, that is tedious to correct. But with guided scrapes in the right places, they each pushed on until the first bow was strung.

My personal goal was to get at least one bow tillered and shot by the end of each group’s overall workshop, demonstrating the entire process from start to finish; a task not usually achieved in bowmaking courses. 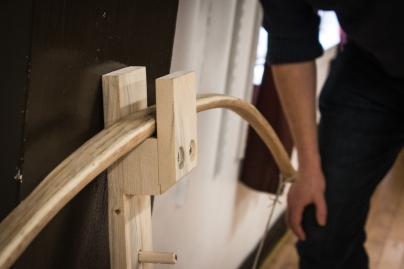 I chose one bow from each class and tillered it while the others continued to work; stopping the class periodically, handing over my knife and letting each student experience the long process of gradually scraping the belly, drawing the bow on the string, not forcing it, but teaching the bow to bend.

Overall the feedback was 100% positive. No stave broke, every bow reached the tillering phase and by the end of the the second weekend, everyone was swinging axes and drawing knives like pros! Most were already talking about which type of bow they wanted to try making next; with one chap even saying that he thinks he ‘caught the bug’. 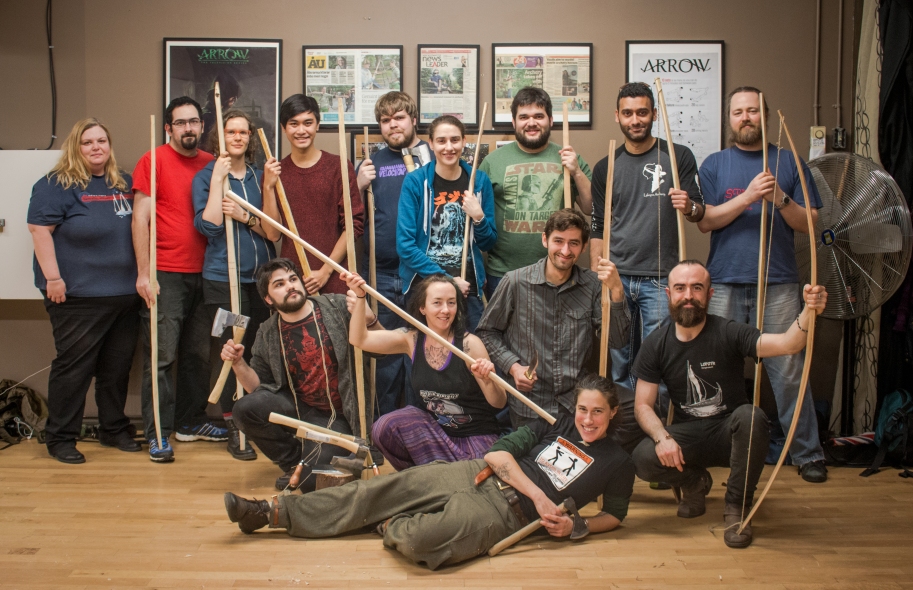 I would like to thank UCD School of Archaeology for their support in letting me take time out of my PhD to come and give this workshop. Giving these students a chance to experience the kind of research we carry out in our own Centre for Experimental Archaeology everyday, I was told, was quite inspiring.

I would especially like to thank Patricia Gonsalves, director of Lykopis Archery in Vancouver for inviting me over. It has truly been an unforgettable event and one I hope to do here again some day.

For more photos and articles on Stephen’s trip as well as his research and other adventures visit www.archaeofox.com , Follow or Subscribe for more!